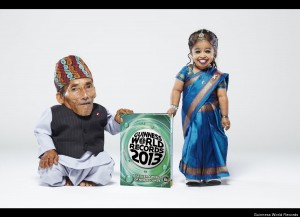 When Ranjana Amge was in the final months of her fifth pregnancy, she feared that she’d never hold that baby in her arms.

The doctor’s exams didn’t go well. Experts didn’t know what to make of her sonograms. Something was wrong.

Now, 20 years later, Amge has reason to be proud. Her youngest daughter is happy, healthy and world famous.

“All the bad feelings are erased, replaced by good ones,” Amge tells The Huffington Post. “We are lucky.”

At just under 25 inches tall, Jyoti Amge of Nagpur, India, is the world’s shortest woman. She’s a college-bound student, with dreams of making it as an actress. Still, she weighs just 12 pounds — only nine pounds more than she did at birth.

Even among dwarfs, Amge is tiny. “Game Of Thrones” star Peter Dinklage is more than twice her height. But Amge remains an optimist.

“It’s hard for me to reach things,” Amge says. “It’s good I have brothers and sisters to help.”

On her first trip to New York, Amge visited the Statue of Liberty, before a media tour to launch the Guinness World Records 2014 edition, which would include a profile in the Daily News, a visit to the ladies of “The View” and a press conference at the top of the Empire State Building.