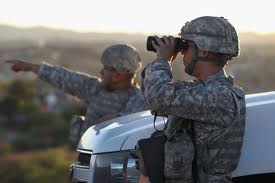 No hot pursuit was necessary for American customs officers to catch a man who they say drank tequila and tried to sneak from Mexico into the south-western U.S. state of New Mexico in a truck full of red chilli peppers.

U.S. Customs and Border Protection officers at a checkpoint found the man on Thursday, sprawled face-down in a load of peppers that filled the vehicle’s open-air trailer, according to a statement from the agency.

The 35-year-old man, whose name was not released, told agents he climbed into the truck while it was stopped in Mexico in hopes of getting a ride all the way to Chicago, according to U.S. Customs.

But he only made it 100 yards (91 meters) into the United States at the Columbus, New Mexico, checkpoint when he was discovered by U.S. customs agriculture specialists inspecting the truck, officials said.

“There was a bottle of tequila next to him and he appeared to be highly intoxicated,” Columbus Port Director Robert Reza said in the statement.

The driver of the truck was allowed to continue onward to his U.S. destination, but the stowaway was sent back to Mexico, according to U.S. Customs.