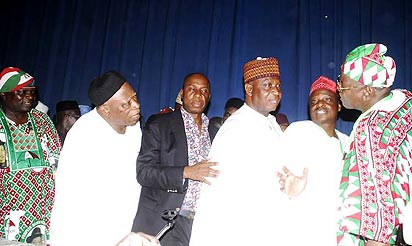 The Peoples’ Democratic Party (PDP) faction led by Alhaji Abubakar Kawu Baraje has said that it has uncovered plots by the Presidency to carry out “Operation Total Crackdown on G7 and their allies in the New PDP”.

The faction, which calls itself “New PDP” alleged that the plan involved the arrest and incarceration of its leadership on trumped up charges.

A statement by the National Publicity Secretary of the New PDP, Chief Eze Chukwuemeka read, “We read the interview of our friend and brother, Alhaji Mujahid Asari-Dokubo, in the PREMIUM TIMES of 26th September, 2013, confirming that President Goodluck Jonathan is under pressure to arrest former President, Olusegun Obasanjo and former Vice President Atiku Abubakar without any further delay.

“The sin of these two distinguished Nigerian statesmen, according to those plotting their ‘demystification’, is their alleged support for the New PDP, including the G7 Governors. That this evil plot is being conceived by the Presidency confirms that the Abacha days are truly here again with us,” he said.

The faction noted that in view of the seriousness of the plot to arrest them with disregard to the provisions of the Nigerian Constitution, its National Chairman, Alhaji Abubakar Kawu Baraje, summoned an emergency meeting of the National Working Committee (NWC) of the party to discuss how best to respond to the situation.

The statement said the NWC resolved at the end of the meeting to forge ahead as no amount of intimidation would deter them, as they are fighting a just cause of “reclaiming, recovering and establishing our party based on the vision of its founding fathers as the party is currently usurped by some members who do not know how it was formed”.

It added that “Baraje, knowing how dirty some of the hawks in the Presidency can fight when pushed to the wall, directed NWC members to write their wills immediately after the meeting as we have entered the stage of no retreat, no surrender – fully determined to reclaim what rightly belongs to us”.

The New PDP lamented what it described as the use of “force” instead of “diplomacy” to resolve the conflict but said it is not disturbed by the latest tactics purportedly adopted by the presidency.

“In this regard, we wish to urge both the Presidency and those detailed to attack us not to waste further time or wait till October 7th to start arresting us as there are thousands of Nigerians ready to step into our shoes and fight this cause to its conclusion”, the statement boasted.

“We are convinced that at the appropriate time; Asari Dokubo will join us when he is convinced as a Social Crusader the injustice we have been subjected to in PDP all these years, so we are not threatened by his outbursts. Our stand is the same as that of late President of the USA, Theodore Roosevelt, who once stated that, ‘Patriotism means to stand by the country’.

“It does not mean to stand by the president or any other public official, save exactly to the degree in which he himself stands by the country. It is patriotic to support him, so far as he efficiently serves the country. It is unpatriotic not to oppose him to the exact extent that by inefficiency or otherwise, he fails in his duty to stand by the country. In either event, it is unpatriotic not to tell the truth, whether about the president or anyone else.

“On a final note, we do not know why General Olusegun Obasanjo is being linked with the New PDP. Let us state unequivocally that this foremost nationalist has not in any way – either directly or by proxy – had anything to do with our existence and operations.

“Ridiculing and plotting the arrest of such a distinguished personality that fought to keep this nation as an entity and contributed immensely in making PDP the most vibrant, virile, versatile and biggest political party in Africa is not the best strategy to use to fight the cause of President Jonathan, who knows what Chief Obasanjo did to make him President in the first place,” the statement concluded.