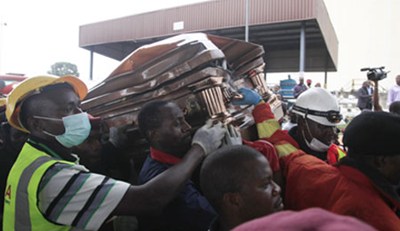 The planned burial of Late Dr. Olusegun Agagu, the erstwhile governor of Ondo State, will go ahead today despite the unfortunate air mishap on Thursday that claimed no fewer than 15 lives when his remains were being flown in an Associated Airline aircraft from Lagos to Akure.

This was disclosed by Chairman of the Peoples’ Democratic Party, PDP, in Ondo State, Ebenezer Alabi, who said after consulting with the former governor’s family, they have “decided to go ahead with the burial.

Moreso, he said, that Agagu’s first son, Feyi and his son-in-law survived the plane crash. “There was no scratch on the casket,” Mr. Alabi added.

“So, while the family sympathized with those that lost their lives and their loved ones, they have decided to go ahead with the burial as was initially planned”, the PDP chairman reiterated.

Meanwhile, the remains of the former governor, which was still intact despite the plane crash, has been conveyed by road to Iju-Odo, his country home and final place of rest.