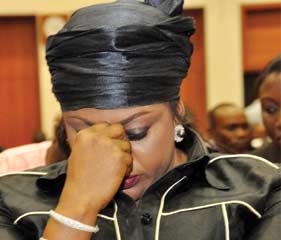 The Niger Delta Indigenous Movement for Radical Change, NDIMRC, has defended the Minister of Aviation, Princess Stella Oduah, over the controversial N255 million bullet-proof cars, warning the House of Representatives not to contemplate arresting her. The group also condemned the panel set up by President Goodluck Jonathan to investigate the purchase of the cars.

In a statement by its President, Nelly Emma; Secretary, John Sailor and Public Relations Officer, Mukoro Stanley, the group said the Aviation Minister did no wrong and held that Nigerians were too much in a hurry in condemning the minister over the purchase of the bullet-proof cars.

According to the group, “Our Checks revealed that the bullet-proof cars were bought so that they can be used by the Aviation Ministry when the country hosts dignitaries from IATA, ICAO and other international bodies and it was through lease financing.

“Princess Stella Oduah has changed the face of airports across the country. She is going out of her way on a daily basis to bring our airports to international standard and should be applauded rather than be crucified,” the group said.

The House of Representatives had threatened to issue a bench warrant for the arrest of the Aviation Minister, Princess Oduah, if, by tomorrow (Tuesday), she failed to appear before its Committee on Aviation to respond to the two controversial armoured BMW cars said to have been bought for her by the Nigerian Civil Aviation Authority, NCAA.