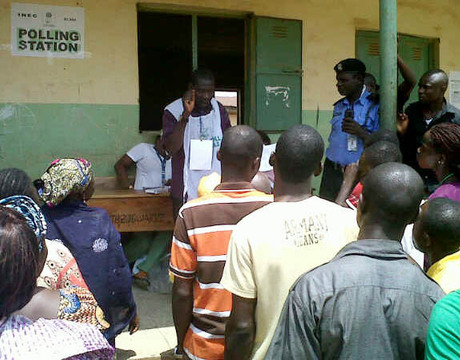 Governor of Edo State, Comrade Adams Oshiomhole has been warned by the Minister of Works, Mike Onolememen against using executive powers, which he derived from the people to disenfranchise them in a mere local government election because it did not go according to hi plans.

The minister, who was reacting to last Tuesday’s re-run election in Esan North East local government area in which the All Progressives Congress, APC, candidate Sam Oboh was declared winner, said he was shocked by the level of “baseless allegations” made by Oshiomhole, who he described as a “self-appointed emperor.

Speaking at the swearing-in of the council chairman at Government House in Benin City on Wednesday, Gov. Oshiomhole had said, “I am embarrassed that the police are involved in carrying electoral materials, arresting EDSIEC returning officers and coercing them into a police station and converting it into a collation centre supervised by policemen imported from Abuja and Lagos in order to subvert the will of the people of Esan North East”.

Onolememen in his response to the governor’s allegation challenged him to tell Nigerians whether it was the result that were “forcefully” signed in Uromi that he (Oshiomhole) used to declare Oboh as chairman or the one signed in Government House.

Speaking through his media aide – Tony Ikpasaja, the minister said it was untrue that he deployed his personal security to rig the election which the state government was conducting for a third time.

He said: “I am at loss as to how a mere ‘VIP’ Protection Escort could have rigged an election covering 106 polling booths in 11 wards spread across the local government area in the presence of over 200 armed policemen. The good people of Edo State and indeed Nigerians are living witnesses to the deception in one-man-one-vote principle of the governor. The facts of the Esan North East council election are there for all to see.”

He noted that despite the state government’s manipulation of the election process, “the good people of Uromi stood their ground and expressed their preferences through the ballot.”

According to the minister, the election turned out to be one of the fairest in the history of local government elections in the state with unprecedented turn-out but lamented that the Edo State Independent National Electoral Commission (EDSIEC) succeeded in disenfranchising thousands of voters through deliberate delay as accreditation and voting started at 2pm in most polling booths.

“To the amazement of all, while the votes were still being collated and counted as at 7 pm at the collation centre in Uromi, headquarters of Esan North East local government area, Governor Oshiomhole’s EDSIEC went on air in Benin City, about 80 kilometres away to announce a forged and contrary result declaring the All Progressives Congress (APC) candidate, Sam Oboh, as the winner” he said.