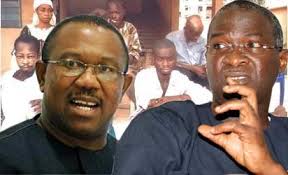 The recent apology by Governor Babatunde Raji Fashola of Lagos State over the ‘deportation’ of 72 destitute to Onitsha on July 24, has been described as ‘courageous’ by the Anambra State Government.

The purported deportation had led to a public spat between the governments of both states as they traded blames over who was responsible for the security and welfare of the affected citizens.

However, some weeks after the heat generated by the alleged deportation had died down, Gov. Fashola, while speaking at the Silver Jubilee symposium of Igbo think tank, ‘Aka Ikenga,’ at the Nigerian Institute of International Affairs in Lagos, insisted that the action of his government was ‘misunderstood’ and that he could not allow the differences on the matter tarnish the bond and friendship that were built overtime with the Ndigbo in the state.

The Lagos governor’s apology was again misinterpreted by a section of Nigerians, who claimed it was the All Progressives Congress, APC’s way of placating Anambrarians against the November 16 governorship elections in Anambra State.

But a statement on Friday by the Secretary to the Anambra State Government, Mr Oseloka Obaze, stated that there was no need trying to parse the apology.

“I do not know if Governor Fashola apologised to Governor Peter Obi, but I know they are in touch.

“As regards Governor Fashola’s apology to the Igbo, he apologised and that is it. There is no need trying to parse his apology as some are trying to do.

“The governor has shown himself to be a courageous, noble and an honourable man. As a politician, he is a blessing to Lagos State and Nigeria,” the statement said.