Home National News Odd News ‘I Was Carried Away By The Aroma’, Housewife Caught Stealing Meat From...
Facebook
Twitter
WhatsApp 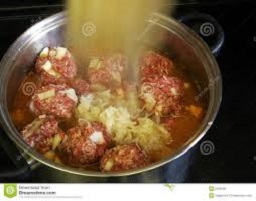 A housewife in Sapele, Delta State, identified as Oghenero (surname withheld), reportedly got her fingers burnt yesterday, when she allegedly attempted to steal a piece of meat from a neighbour’s soup pot.

It was reliably gathered that the woman, a mother of three, gained access to the soup after the neighbour who was preparing it left it on the fire unattended and went into her room to get her GSM phone which was ringing.

The light fingered housewife was said to have moved into the kitchen while the other woman was speaking with her caller but was caught by another neighbour who had been watching her movement from a distance.

Confirming the incident, the neighbour identified as Mrs Mouka Felicia, said the hot piece of meat fell from the thieving housewife’s mouth after she was slapped by her brother-in-law and she allegedly confessed to have been carried away by the aroma emitting from the pot of soup.

Family sources said the latest incident is not the first as the woman has been involved in several cases of petty stealing for which her husband threatened to send her packing.