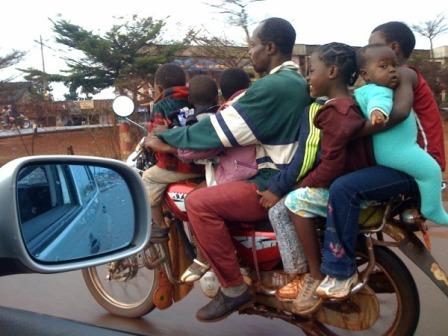 The Sokoto State police command has banned the transportation of more than one passenger on a motorcycle, its Spokesman, DSP Al-Mustapha Sani, said.

Sani told the News Agency of Nigeria (NAN) on Sunday in Sokoto that the ban followed the prevailing security situation in the country and “we should not be complacent in Sokoto”, he added.

“Motorcyclists have been banned from carrying more than one passenger. There should always be two people on a bike, consisting of the rider and one other passenger.

“The police want to warn those who have the Kasea brand of motorbikes, which is more rugged and stronger, to stop the habit simply because it can carry between two to five persons at a time.

“We have found out that once there are more than one passengers on the bike, there is the tendency for such passengers to perpetrate some criminal activities like handbag and cell phone snatching.’’

The police spokesman added that motorcycles carrying more than one passenger often caused road crashes when the riders meandered through traffic.

Sani, who said that the ban affected both commercial and private motorcyclists across the state, stressed that “we will implement the ban to the end and anybody found flouting it will face the law.’’

He, therefore, appealed to residents to cooperate with the police as the ban was not targeted at anyone or group of persons.

“The ban is to further sanitize both intra-city and inter-city roads and ensure a crime-free state. (NAN)