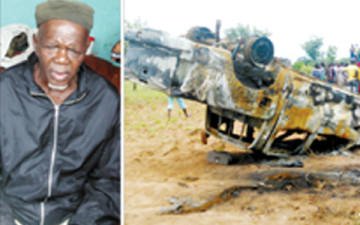 The Commission of Inquiry into the killing of security operatives on May 7, at Alakyo village in Lafia, says it will hear the testimony of the Ombatse priest on October 28.

The commission’s Chairman, retired Justice Joseph Gbadeyan, made this known during an interactive session with, Governor Umaru Al-Makura, in Lafia on Friday.

Mr. Gbadeyan said the commission would not accord the Ombatse priest, Legu Allu, popularly known as Baba Alakyo, any special treatment.

The commission took the testimony of first class traditional rulers in their palaces.

Mr. Gbadeyan said the testimony of the ‘Ombatse’ priest would not be taken elsewhere other than the venue of the sitting of the commission in Lafia.

The chairman said Eggon elders and the paramount ruler of the Eggon people, ‘Aren-Eggon’ Bala Angbazo, had consulted and impressed on the priest to appear before the commission.

He said that the traditional ruler, however, said ‘Ombatse’ priest’s testimony would only be possible if the commission writes a letter of undertaken to guarantee his safety.

Mr. Gbadeyan, therefore, appealed to the governor to consider providing adequate security during and after the priest’s testimony.

He also thanked the Commissioner of Police in Nasarawa State, Umar Shehu, for the command’s cooperation since the commencement of the sitting.