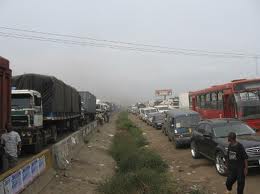 The Federal Controller of Works in Lagos State, Mr Oluwatoyin Obikoya, said on Tuesday that contractors handling the Lagos-Ibadan expressway had commenced palliative work and construction of addition lanes.

Oluwatoyin told the News Agency of Nigeria (NAN) in Lagos that the idea was to ease the traffic congestion on both sides of the highway.

He urged motorists to expect traffic diversions due to the construction work on both sides of the highway.

Oluwatoyin said the additional lanes would be constructed on the inner road shoulders alongside the repairs of bad portions of the road.

“Members of the public should be patient because the federal government is trying to make life much more comfortable.

“Julius Berger will continue its palliative work to ease traffic congestion on the road as new lanes are added.

“They have started the construction of the additional lanes around their site yard, but the work is preparatory to carrying out permanent work,” he said.

The controller said that measures were in place, through scientific calculations, to ensure smart ways of diversions.

“This is to ensure that the lane constructions on either side did not affect either Lagos bound or Ibadan bound carriageway negatively.’’

Oluwatoyin said the new inner lanes, which would be temporary before the main reconstruction project, would be built in every five kilometres.

He appealed to motorists to be calm and cooperate with the contractors when the diversion came into force in the next one or two weeks.

He said the process for release of funds by the Infrastructure Bank was being concluded.

“Very soon, the agreement will be concluded for the funds to be released,” he said. (NAN)