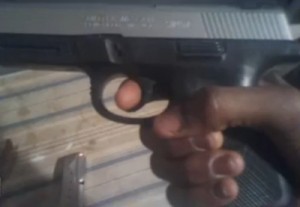 A 25-year-old woman, Yakbyen Nanbol, who allegedly conspired with her lover of the same age to murder her husband, has been nabbed by policemen in Jos.

The woman, a mother of one child, which she had for the deceased husband, yesterday, said she did not ask her lover, who was her late husband’s friend, to kill him.

She said her lover (Samson) had approached her several times for love-making, which she always turned down.

She said: “I knew Samson through my husband. He has been coming to our house whenever my husband traveled. My husband did not stay home regularly.

“Samson will come to the house, requesting for lovemaking. I finally gave in and we have been meeting until he killed my husband.”

However, the suspect claimed that he had been in love with the woman since July and had been having the affair since, whenever the husband, a labourer, was away.

Samson, a native of Langtang South, said why he killed his friend he noted that because of his “impressive performance,” the woman advised him to kill the husband once he came back from Port-Harcourt, where he went for a job, so that they would be free to get married.

He said: “I stay in Langtang South, but she is in Langtang North and I have been coming to meet her. One day she suggested we should be married. I rejected the idea instantly but later had a second thought and agreed to marry her.

“I promised to give her money to return the dowry but she said no, that I should kill the husband and I agreed.

“The day her husband came back, she called me, told me her husband had come. I went there in the night and killed him with a gun.”

Parading the suspects at the State Police Headquarters alongside 14 others, Plateau State Commissioner of Police, Chris Olakpe, lamented incidences of homicide, saying the command was battle-ready to combat any form of criminal activities in the state.