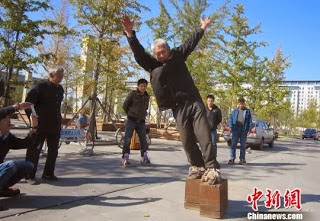 Heavy footwear is usually considered uncomfortable, but for Zhang Fuxing weight is definitely not a problem. The 51-year-old from Tangshan, China, spends every morning walking in a pair of iron shoes weighing 405 kilograms.

For over seven years, Zhang Fuxing has spent his morning exercising on a pair of impossible shoes made of heavy iron blocks. The factory worker designed and created the bizarre footwear himself by welding pieces of iron 30-cm-long and 20-cm-wide. At first, the shoes weighed only 70 kilograms, but as his workout intensified he kept adding more weight.

Now his shoes are 40-cm-high and weigh a whopping 405 kg, about seven times his own body weight. It seems impossible that a person could even lift their feet off the ground wearing such weights, but Zhang says he usually manages to walk around a dozen meters in 20 minutes, every morning. He keeps the unusual shoes in his courtyard and says they are so heavy he isn’t even worried they might be stolen.

Zhang Fuxin has developed his own walking technique which actually allows him to lift the 405-kg-heavy shoes off the ground, and says he plans to add even more weight to them early next year. This Chinese superhuman told Xinhua News he wants to contact Guinness World Records to have his name mentioned in their famous book.