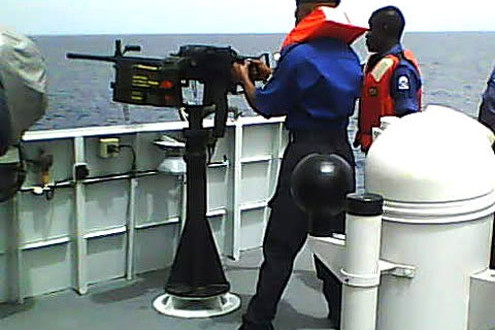 A Naval rating, who sustained bullet wounds during an exchange of gunfire with dare-devil armed robbers, who attempted to hijack a bullion van at Apapa area of Lagos about two weeks ago, has been rewarded by the Flag Officer Commanding (FOC) Western Naval Command, Rear Admiral Ibok Ette Ibas.

The rating identified as Warrant Officer Williams Louis Epian, is currently undergoing treatment at an undisclosed hospital in Lagos State.

Rear Admiral Ibok Ette Ibas, while giving the victim the reward at the end of a parade to mark the end of his inspection tour of his command, said: “Warrant Officer Epian attached to the state anti crime outfit, Ops Mesa, is always at the fore front whenever there is an operation. He can be described as a man with the heart of a lion. There were situations where his colleagues would chicken out due to lack of guts, but he would go through”.

The FOC added that during the confrontation with the robbers that attacked the bullion van along Marine Beach area, Warrant Officer Williams Epian shot one dead.

He also warned officers and ratings to desist from abandoning their duty posts.

“I urge you all to remain vigilant and shun all partisan entreaties. As a professional service in a democratic dispensation, we must remain loyal to the government and adhere to the ethics of honour, integrity and respect in all our interactions within the larger society,” he said.