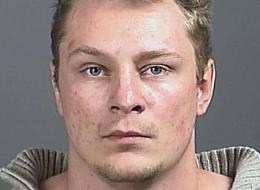 John Stanley Snorsky, the 26-year-old suspect in an attempted Aurora kidnapping last week, allegedly asked for a hug from his 8-year-old victim just before taking her.

“He told me to give him a hug and I was trying to close the window but I couldn’t,” the young girl told police in the affidavit obtained by 9News, adding that the man who took her also said that his name was “Jonathan” and that he was a friend of her parents. In a report by 7News however, the girl said she did not believe him and told him, “I can’t talk to strangers.”

The girl also told detectives that she was trying to get away and make it down her bunk bed stairs but, “he got me and he took me outside.”

Once outside, the girl said that she was dropped after pinching her abductor and screaming “Daddy! Daddy! Daddy!” which woke her parents.

Snorsky was formally charged with second-degree kidnapping, first and second degree burglary, and enticement of a child on Tuesday.

“Just put him away, keep him in jail, keep our kids safe,” Beatrice Padilla, the girl’s grandmother, told CBS4.

The affidavit also found DNA belonging to Snorsky on the girl’s clothes. According to investigators, the match would exclude 99.9 percent of all caucasian males unrelated to Snorsky.

Snorsky is accused of removing a window screen to a girl’s bedroom, grabbing her and trying to flee on Oct. 28. The girl’s screams during the alleged attempted kidnapping provoked her father to run outside where he found his daughter already running back toward the house.

From the alley at the rear of the house, the victim’s father told investigators that he saw a silver or grey BMW sedan driving away through the alley. Police say however that the car was likely a silver Mercedes that Snorsky owned and that has since been impounded. Snorsky has not yet entered a plea.

Kidnappings by a stranger are the least common kidnapping scenario. According to the National Center for Missing and Exploited Children’s most recent data from 1999, only 115 children were kidnapped by a total stranger out of the approximately 800,000 children under the age of 18 who went missing.