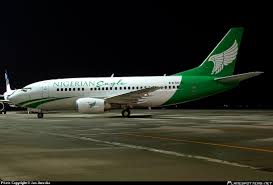 Some federal lawmakers have reportedly rejected moves by the Federal Government to designate Aero Contractors airline as the country’s national flag carrier, saying the idea was not only wrong but smacked of lack of seriousness on the part of Aviation decision-makers.

The decision to make Aero the national carrier is purportedly informed by the fact that the Federal Government owns majority stake in the airline after the Asset Management Corporation of Nigeria (AMCON) took over its assets because of bad debts. The remaining stake, 40 per cent, is owned by the Ibru Family through Legacy Holdings.

The Aviation Ministry, which had since announced plans to operate a national airline, appeared to have settled for Aero after one of the airline’s Boeing 737-500 classic aircraft, which was taken abroad for routine maintenance, flew back into the country painted in the country’s national colours last week with the name ‘Nigerian Eagle’.

Although ministry officials in the past had publicly denied the choice of Aero as the country’s official airline, it is being reported that the plane would be unveiled possibly this week by President Goodluck Jonathan as part of the new airline.

But members of the Senate and House of Representatives committees on aviation, who spoke in separate interviews yesterday, said they would not support government’s move.

Senator Mohammed Ali Ndume (PDP, Borno), who is a member of the Senate Committee on Aviation, said Aero was already a dying airline that did not deserve to fly the national colours.

“How can they bring a dying company to be our national carrier just to cover up for some of their lapses? They want to use our national resources to cover up the inefficiency of some people who ruined their company and were bailed out with tax payer’s money”.

He added that the Aero idea “is already dead on arrival because the company was almost dead; just because they painted one aircraft in Nigerian colours does not make it our national carrier because it takes more than that”.

Speaking in the same vein, a member of the House Committee on Aviation, Rep Idris Garba Abdullahi (APC, Niger), said it appears the Federal Government was not serious about developing the aviation sector.

“If we’re serious, we can’t have Aero Contractors as a national carrier. This is an airline that cannot service Abuja, Lagos and the rest, yet they’re talking of having it as a national carrier? What will Aero do internationally when it can’t serve us domestically? I think the Federal Government has to be serious for once,” he said.

Idris said if well harnessed, the aviation sector could boost Nigeria’s economy. “If the Federal Government wants to do this thing well, they can go into a lease agreement with some money and pick the routes that we’re already relating with”.

He added: “They cannot start with Aero Contractors. We need a bigger airline to ply those routes. This is something that can sustain our economy, but we don’t want to be serious. Look at Ethiopia for example; they’re doing well in that regard”.

Chairperson of the House of Reps Committee on Aviation, Rep Nkiruka Onyeojocha (PDP, Abia) said she could not react to the report as she is currently out of the country.