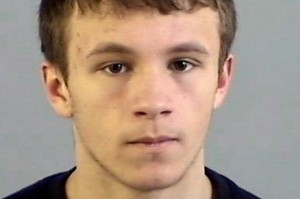 A schoolboy who began a life of crime the day after his 10th birthday was yesterday locked up for joining a gang in a terrifying armed robbery.

Baby-faced Nathanual Hemy – due to become a father in the next few days at the age of 15 – was told by a judge: “You have a terrible record.”

The court heard how in just five years Hemy has notched up nine convictions for 22 offences including criminal damage and car theft.

He was sentenced to three-and-a-half years for the raid in which he threatened a newsagent’s shop assistant in her 60s with a large knife.

The teenage dad-to-be followed ringleader Sid Pumford, who was brandishing a meat cleaver, into the store and confronted staff as they opened up.

Neighbours heard screams from inside as Hemy struggled with the manager and then pointed his blade at the traumatised assistant, while Pumford leapt over the counter and ripped the till out.

The raiders – their faces hidden with scarves – fled with £150, chased by the brave manager. But Hemy’s mobile phone had fallen from his pocket during the melee in the store – crucial evidence that later placed him at the scene.

Hemy denied robbery and carrying a knife during the Southampton robbery in April but was found guilty by the city’s Crown Court. Judge Peter Henry told him: “Despite your young age, you played an active and physical part in this robbery.

“Although you were led, you took a significant role in what happened. You participated in this robbery in an enthusiastic manner.”

The judge told Hemy his crime had a devastating impact on his “courageous” victims, saying the manager is now “anxious” and the elderly assistant has “suffered considerably” since their ordeal.

He added: “This woman has experienced panic attacks and chest pains and one can only imagine the effect on her of what you did.”

Despite the judge’s scathing criticism, Hemy’s family yesterday blamed his gang leader and lack of a father figure for his decision to become a career criminal.

For the last two years he has been raised by his great-grandmother Jacqueline Williams, 71, and her daughter Lorraine Claffey, 51.

Both claimed his behaviour and descent into a life of crime stem from when his mother Lisa Hemy, 35, placed him in care when he was nine – and from not knowing his dad.

Widow Jacqueline, who fostered Nathanual two years ago after had been placed in a series of foster homes, explained: “He doesn’t even know his dad’s name. I’m not sure Lisa does.

“There are a few possibilities.

“He’s never known a dad and never had a male role model to look up to.

“I think a dad would have been good for him.

“I think that is behind most of his problems.”

She said Lisa Hemy placed him into care when he was aged just nine because she had serious problems coping with him.

Just a year later he was given his first conviction for criminal damage for smashing a window at the Vermont School in Southampton, Hants.

“His mum placed him into full-time care when he was quite young.

“I remember both me and Lisa’s mum Lorraine were not happy with her.

“Lisa had her problems.

“She had a drug dependency problem.”

She told us: ”I want Nathanual to have better life than the one I can give him. I want him to grow up to be a nice lad.’

“He was then placed into full-time foster care and went to live with a family in the New Forest.

“He was only there for about 18 months because he kept running away.

“He told me that his foster mum kept insisting that he had his hair cut short and he didn’t like the way she dressed him.

“He’s always had lovely curly hair which his very proud of.

“Eventually I had to go to the courts to foster him because he kept running away and ending up in jail.

“I’ve been looking after him for the last two years.

“He has his moments but has never been problem too me.

“He will slam the door every now and again and he can be cheeky, but nothing out of order.”

Mrs Williams, who has 18 grandchildren and four great-grandchildren, insisted that Nathanual was a good boy.

She revealed that he and girlfriend Lotus Lendon, 16, were expecting their first child, a boy already named Reegen, in the next few days.

She said: “He’s a good boy really. I just hope that last court case will make him change his ways. He’s a nice boy at heart.

“Nathanual is really excited about becoming a dad but is obviously sad that he will not be able to be there when the child is born. I’m hoping that fatherhood will change his ways.

“He’s already told me: ‘Nan. I don’t want my son to end up like me’. It’s such a shame what has happened.

“We are so devastated as a family and I know he is gutted he will miss the birth of his first child.”

Mrs Williams said Nathanual had been in and out of a succession of specialist behavioural schools but had no formal academic qualifications.

She said: “He’s trying to turn his life around.

“He’s started studying for his exams.

“He’s done wrong and he’s got to be punished for it. He knows that.

“He’s been held in the Medway Secure Training centre in Rochester in Kent.

“I’m hoping that when he’s 18 he and his girlfriend will get a flat together and start a little family.

“But I’ve still got his bedroom and he’s always welcome to come and stay with me whenever he likes.”

Although he is still a juvenile at 15, he can be named because he was tried in an adult court alongside adults and no application to hide his identity was made.

His grandmother Lorraine Claffey said: “I blame Pumford. Nathanual fell in with the wrong crowd and now he’s paying the price.”

No one factor on its own will lead a juvenile into crime, but a combination of factors crop up time and again.

The most obvious one is poor family supervision, particularly in the period between school and bedtime.

Also emotional difficulties at home can impede their performance at school. Then they become disaffected and drift into a gang of youngsters who have similar difficulties.

Another factor is personality. Some people need a bigger buzz to get them energised and stealing, nicking cars or getting involved in gangs and violence can give them that. There is a sense of achievement in “having got away with it”.

That is even more likely if you have a youngster with comparatively high intelligence in a home with a complex family, where perhaps he doesn’t know who his father is.

Being placed in care is another high risk factor. In that situation they want to show off to the other children there.

For a child who is ignored and doesn’t have any sense of significance, being a well-known local criminal gives him status.