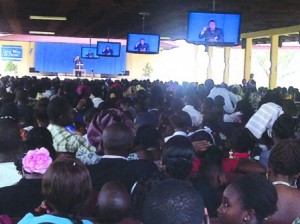 A church convention for the deaf holds in Benin City

Two of the three auditoriums were packed with people numbering over 1,350. Yet, the atmosphere was so serene and quiet that one would have heard the dropping of a pin. It was neither a social gathering nor a political rally. Rather, it was an assembly of people who speak a language that you can not hear, but one that you can see.

The only sound heard was the chirping of birds. It could best be described as a silent assembly for the hearing-impaired. The only visible response from them was the waving of appreciative hands, the way a gentle breeze would sway leaves, in response to talks delivered from the platform.

The gathering was the 2013 American Sign Language, ASL, District Convention of Jehovah’s Witnesses. It was one in a series of 11 conventions held in Benin, Edo State, with the theme: “God’s Word is Truth!”

Hanging on each of the two halls were four large TV screens conveying pictures of speakers on the podium from two video cameras in the front row.

Delegates were instructed with talks, symposiums, interviews and Bible-based dramas, including topics like “Cling To What Is True”; “Walk Straight According To The Truth”; and “What is Truth?”

Other features of the programme were three dramas with the themes, “Show Yourself Attentive To the Wonderful Works of God”; “Be Faithful And Conquer Your Fears”; and “Prepare Your Heart For The Trials Ahead”.

Highlights of the convention included the baptism of 10 delegates – five males and five females. [PMNEWS]