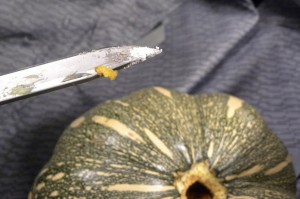 A woman has been charged with drug-trafficking after airport officials found three pumpkins in her suitcase allegedly stuffed full of cocaine.

Customs agents at Montreal’s International Airport in Canada became suspicious when scanning equipment picked up masses inside the pumpkins which were in luggage belonging to Mercedes Jerez Farias.

They turned out to be bads filled with a chalky substance believed to be around two kilos of cocaine.

The 26-year-old appeared before a judge on Thursday charged with importing drugs and drug possession for the purpose of trafficking.

If found guilty, Jerez Farias faces a minimum of two years in prison.

It is not known if she is a Canadian citizen but court documents show she lives locally, CBC Canada reports .