An 11-year-old boy is chained up by his family in the eastern coastal province of Zhejiang in China. His family said the boy injured his head when he was one year old and started suffering from mental disorders. 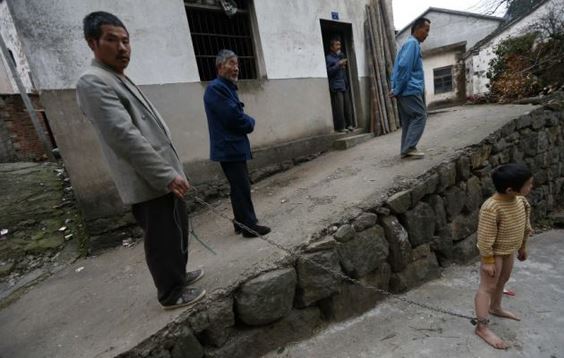 According to family, they had no choice but to restrain him on chains as he had a tendency to attack those around him.

Zili’s lives with his physically disabled grandfather and his intellectually handicapped father, who did not want to be named. The boy’s mother died of cancer.

The story of He Zili is a shocking example of how mental disorders are dealt with in rural China. Statistics released this year by China’s National Center for Mental Health showed that as of the year of 2009, 100 million Chinese suffered from mental health problems with more than 160 million citizens afflicted with serious mental illnesses such as schizophrenia and paranoid psychosis. Such figures indicate that one in every 13 Chinese in 2009 had a mental health problem.

Back in the 1950s, the reported ratio of Chinese adults suffering from mental illness was just 2.7 per cent, or one in every 37 Chinese citizens. Worldwide, there are four psychiatrists and thirteen nurses for every 100,000 people. In China, the ratio drops to 1.5 psychiatrists and 2.2 nurses per 100,000.