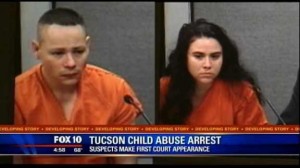 Police on Wednesday were poring over a journal they say a 17-year-old girl kept while she and her two younger sisters were imprisoned by their mother and stepfather for up to two years.

Tucson Police Chief Roberto Villasenor said investigators were combing through the diary for evidence as they build a criminal case against the 32-year-old mother and 34-year-old stepfather.

He declined to reveal the diary’s contents but said the teen kept one of her most prized possessions — a photo of singer Enrique Iglesias — in the journal, which was kept inside a satchel.

“It did contain a lot of information that I feel will be useful in helping us to determine the method and length of the imprisonment,” Villasenor said.

Investigators said the two younger girls, ages 12 and 13, escaped through the window of the bedroom they shared and alerted a neighbor Tuesday after the stepfather tried to break down the room’s door and was brandishing a knife.

Police later discovered the 17-year-old was being held separately from her sisters in another room. The three girls were malnourished and dirty and told officers they hadn’t taken a bath in up to six months.

Investigators were trying to determine the last time the girls attended a school. No schools in the area had a record of them, Villasenor said, and police haven’t been able to verify the mother’s claims that the children were home-schooled.

The girls’ accounts of being held in captivity were consistent, Villasenor said. They are now together at a group home in the custody of a state child welfare agency.