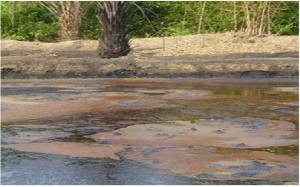 Environmental Rights Action/Friends of The Earth Nigeria (ERA/FoEN), an NGO, has urged Shell to clean up oil spill sites within its oil field in Ikararama community in Yenagoa, Bayelsa.

ERA/FoEN, an environmental rights focused Non-Governmental Organisation (NGO), criticised the slow response of Shell to an oil spill incident, which occurred in Ikarama on Nov. 2.

The News Agency of Nigeria (NAN) reports that an oil spill from Rumuekpe crude delivery line operated by Shell had discharged some 482 barrels of Shell’s Bonny Medium crude stream into the environment at Ikarama community.

Mr Alagoa Morris, Head of Field Operations at ERA/FoEN’s Bayelsa office, told NAN that the oil firm had yet to commence crude recovery and clean-up of the contaminated site.

He said that the development had led to continued exposure of the community’s residents and the environment to the toxic effects of crude oil since Nov. 2.

However, Shell in a report on its website, claimed that it commenced the recovery of the spilled oil on Nov. 12 and that the clean-up of the spill site would be completed in April 2014.

NAN’s checks at Ikarama on Monday showed that the clean-up had yet to commence.

Morris said that field reports from ERA/FoEN’s environmental monitors showed that the spilled crude had been spreading and causing further degradation to the environment.

”As a follow up, ERA/FoEN visited again on the 17th of December, 2013 with a view to ascertaining the state of the immediate environment, especially as to whether Shell has mopped up the spill.

”The spill was noticed to have spread over a 100 metres by length and, over 20 metres by width. During ERA/FoEN’s first visit, due to the vegetation cover it was not possible to properly observe the spread.

”Economic trees such as palm trees and other crops like plantain and sugarcane were observed within the site polluted by crude oil”.

According to him, the NGO had, in its field report, demanded the immediate commencement of clean-up activities to forestall further damages to the ecosystem.

The NGO challenged the oil firm to take steps to protect its facilities from vandals who often caused damages to the environment and residents.

ERA/FoEN also urged the oil communities to guard against vandalism and report anyone found culpable in the act.

When contacted, Mr Precious Okolobo, Shell Spokesman, declined to speak on the perceived slow response of the oil firm to the spill in the community. (NAN)