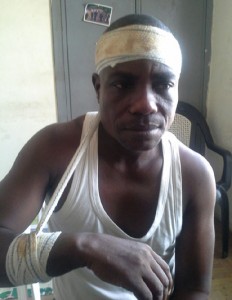 Unknown gunmen yesterday attacked a chieftain of the All Progressives Congress, APC, in Ogun State.

The gunmen broke into the house of Chief Kushimo Lukmon at Ita-Eko, Abeokuta, the Ogun State capital.

He however reportedly escaped death following prompt intervention of men of Vigilance Service of Ogun State. Speaking from his hospital bed, Lukmon said a gang of six men invaded his residence at 5,Famuyiwa close, Surulere, Ita-Eko, Abeokuta, around 1:00am and threatened to kill him if he did not drop his ambition for a seat at the Ogun State House of Assembly.

According to him, he was hit on the head and arm with sharp objects which made him lose consciousness before he was rushed to the hospital. Narrating his ordeal, the victim said the assailants were wearing masks and came with dangerous weapons such as guns, rods, acid and matches.

“They did not steal anything but almost r*ped my wife and threatened to kidnap my children before they were chased away by men of vigilante.

“I was also warned not to contest for Ogun State House of Assembly from Abeokuta South constituency II in 2015.

“They said what I saw is a tip of an iceberg.

“My life is in danger, because I could recall that I escaped a gun shot last week from unknown gunmen”, he said.

When asked whether if he had reported the case to a police station, the victim said men of vigilante have done that.