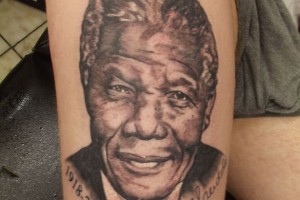 A carpet fitter has had a huge likeness of Nelson Mandela tattooed on his thigh as a personal tribute to the anti-apartheid icon.

Yorkshireman Gareth Smith, 43, spotted an advert on Facebook for a free tattoo of the former South African leader after his death last week.

Tattoo artist Chris Moss took about three hours to ink the design, which is around two hands wide, onto Gareth’s leg.

Chris, who runs the K2 Body Art shop in Richmond, North Yorkshire, was inspired to make the offer after watching TV tributes.

He said: “I am a spiritual man and I was compelled to do it.

“When I decided to do it, I said a prayer and I searched on the computer for ‘iconic images of Nelson Mandela’.

“I looked through three pages of images and then this one knocked me out.”

Chris then mapped the design out in preparation for inking it onto a customer – and Gareth was delighted to take up the offer.

Gareth, of Catterick, said: “A great man died and this is a great tribute. I think it is an amazing tattoo.

“Everyone I know has commented on it and he has caught such a good likeness.

“Nelson Mandela is a great person who did great things not just for South Africa, but thoughout the world.”

Mr Smith already has a dragon image on his shoulder inked by Mr Moss, a former pig farmer who became a tattooist in the wake of the foot and mouth disease outbreak.