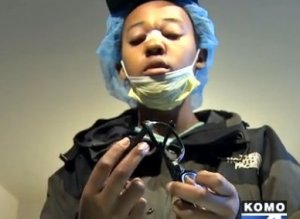 She took a bullet to the forehead and lived to tell the tale.

Alonza Bryant, 16, was asleep when gunshots rang out in her South Seattle neighborhood Saturday night. One bullet pierced the living room window of her family’s home and struck Bryant between the eyes.

By sheer chance, she had fallen asleep wearing her glasses. Slowed by the spectacles’ frame, the slug lodged itself in the bridge of her nose, wounding Bryant but sparing her young life.

KIRO said shooting suspects drove by the house twice, spraying it with bullets each time. Police said Bryant was not the intended target.

Police believe the shooting was gang-related and allege that someone who resides in the home has a gang affiliation. Bryant and her mother, LaVette Bryant however denied that anyone in the family is involved with a gang, although her mother told KOMO that a recent visitor might be connected to one.

Although they are angered and outraged by the shooting, they are also thankful for what neighbors have called a “Christmas miracle.”

“It’s amazing. It’s God sent. If it weren’t for God she wouldn’t be here,” her mother told KOMO.