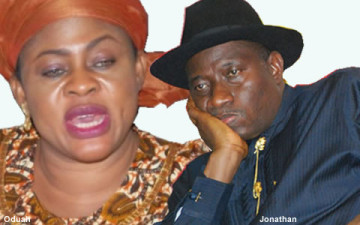 The pan-Yoruba socio-cultural group, Afenifere, has called on President Goodluck Jonathan to take decisive action on the scandals surrounding the Minister of Aviation, Princess Stella Oduah, so as to clarify his stance on corruption.

The embattled minister had barely escaped the heat generated by her purported involvement in a scandal surrounding the purchase of N255m bulletproof cars in an agency under her ministry than allegations surfaced in the social media that she lied about her educational qualifications as contained in her curriculum vitae.

The new allegation has led to fresh demands for Oduah’s removal by various groups in the country.

In its reaction to the latest round of scandal involving the minister, Afenifere said the controversies trailing her were becoming too much to be ignored by the President.

Afenifere spokesman, Mr. Yinka Odumakin said the group wants Jonathan to order an investigation into the certificate allegation and act on the reports of the investigations into the allegation that Oduah asked the Nigerian Civil Aviation Authority to buy her two BMW cars worth N255m.

He said, “On the recent scandal surrounding the Aviation Minister, which has to do with her certificates, we think it is a recent scandal, which has not been investigated. But on the issue of the car scandal, the President has to bring that to a closure. If she is not guilty of any offence, we should be told so. But if she is guilty, she should be fired. The scandal has become a big issue that cannot be ignored”.

Speaking in the same vein, the opposition All Progressives Congress, APC, said it was unfortunate that President Jonathan had yet to speak out on the report of the presidential panel he set up to investigate the cars scam, several weeks after the report was submitted.

APC Interim National Publicity Secretary, Alhaji Lai Mohammed said by retaining Oduah in his cabinet, the president was only admitting to harbouring corruption.

“Don’t forget that about two months ago when this scandal broke, we said the president’s body language showed that he was accessory to corruption. Up till now, he has not spoken up on the outcome of the panel he set up himself. “As long as the President keeps the Minister of Aviation in his cabinet, he is sending a loud and clear message that he is aiding and abetting corruption”, Mohammed said.

An Abuja based pastor, JS Yusuf who also doubles as the senior pastor of Touch for Recovery Outreach International has stunned many after releasing...
Read more
- Advertisement -