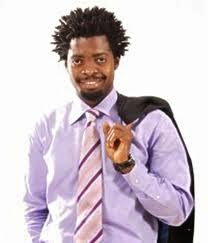 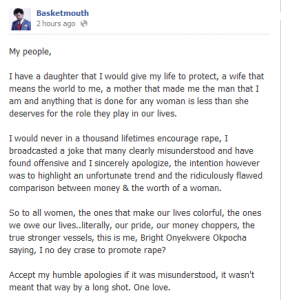 Foremost comedian, Bright Okpocha, popularly known as Basketmouth, has come under fire as friends and followers on the social media (facebook and twitter) attacked him over his “rape joke” Sunday.

Most followers felt the joke he posted on his facebook account encourages rape, and within a few hours it went viral, he was under severe criticism, with some followers calling on telecommunications giant, Globacom, to terminate his deal as an ambassador of the company.
The controversial joke is about dating scene involving white girls and African girls, with many arguing that the comedian encouraged rápe at the 9th attempt.
He later apologised to his fans and assured them that he would never encourage any act of violence against women.
The comedian has made a name for himself in the entertainment industry with international concerts and opened gigs that included the likes of Joe, Boyz II Men, Sean Paul, Wyclef Jean, Kool & The Gang, Akon, Dru Hill, Busta Rhymes, Jay-Z, Beyonce, Fat Joe, Snoop Dogg, Ciara, Chris Brown and many more.