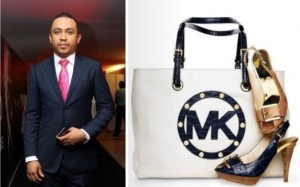 We all heard a couple of days ago, when Cool FM‘s Freeze claimed he was worth over $200, 000 in wrist watches. Well that wasn’t all he said.

Apparently, Freeze is not a big fan of popular US designer collection Michael Kors.

While responding to a question about which designers he wouldn’t be caught wearing, Freeze told Ademola Olonilua of Punch Newspapers it’d definitely NOT be Micheal Kors, describing the brand as ‘loud, ugly and cheap’.

‘I am sorry but I just think that brand is so razz. First their name, I think their name is so razz. Not exactly the name, it is the brand, all you have for the logo is MK. Their products are loud, ugly and cheap‘, Freeze said.

He further described the high end brand as always coming second place to other top brands;

‘I see someone wearing a Michael Kors watch and I see it as they are trying so hard to wear Rols gold. ‘I can’t afford that so the next thing is to pick up Michael Kors’ I would rather take equally priced designer but with a bit more class and less noise. I would never be caught wearing that‘, he added.

And which kind of designers does Freeze love to wear, he says ‘Designers I like are Tom Ford, Gucci, I love LV shoes that are not monogrammed. I like Hermes; I think that is a really brilliant designer. I like the fact that they play with orange a lot‘.

Hmm….makes sense ooh, but does Michael Kors even know who Freeze is?