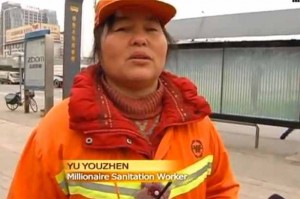 A Chinese millionaire lives a secret double life working as a street sweeper for £140-a-month.

Yu Youzhen, 54, cleaned-up after receiving a government payout and is now worth 10 million yuan – £1 million.

But instead of using the money to live a life of luxury she has kept her job as a sanitation worker.

Diligent Yu said she doesn’t want to lose her work ethic or set a bad example for her children.

She said: “Work is not just about the salary, it makes one focused. Laziness gives rise to all sorts of bad habits.

“I want to be a role model for my children, I do not want to sit around idly and eat up my fortune.”

Lucky Yu’s rags to riches story began five years ago when her family land was bought by the Chinese government for a property development.

She used her windfall to become a real estate tycoon building up an empire of 21 properties – and earning a massive income from the rent.

But mum-of-two has no plans to retire even after enduring around 40-years of hard labour working as a farmer, cook, lorry driver and street sweeper.

She wakes up at 3am, six-days-a-week, donning her orange jacket to empty bins and scrub streets in the city of Wuhan.

Her boss says that in 14-years of work Yu has never been late and has only had three days off to attend the funerals of her mother-in-law and father.

Both her children still have jobs and son Liang, 33, has even worked selling lottery tickets.