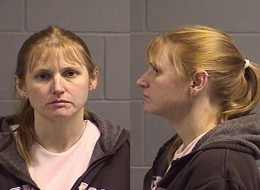 A former Wisconsin medical examiner who took a piece of spinal column that had been removed from a corpse to train her cadaver dog, pleaded guilty to felony charges on Friday, according to court documents.

Traci England, 46, will be sentenced February 10 on two felony counts of misconduct in public office. Theft and obstruction charges against England were dismissed as part of a plea bargain, the Forest County Circuit Court records showed.

The criminal complaint said England took a piece of bone from a corpse’s spinal column after another medical examiner removed it during an autopsy on September 5, 2011.

She told fellow employees she planned to use the bone to train her cadaver dog, the complaint said.

Investigators wrote in the complaint that England “made a comment on how lucky she was to have gotten this section of the spine because it was hard to come by.”

During a search of her Town of Newbold home on January 4, 2012, investigators found what appeared to be brain and liver tissue along with a piece of bone in bags on a shelf in her garage, the complaint said.