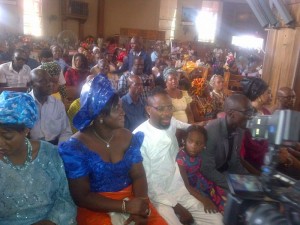 In appreciation to God for sparing his life through his kidney transplant surgery in India, popular music producer, OJB Jezreel, invited friends, family and well-wishers to St Leos Catholic Church, Ikeja, for a thanksgiving ceremony . The church service was officiated by Msgr. John Aniagwu, Fr. Joseph Anyanwuu and Fr. Tobias Nwafor. During the ceremony held on Sunday, January 19th, 2013, the cleric announced, “This is a gathering of thanksgiving. We have come to thank God that He did not abandon us during the struggle, but brought us into a new year. We need to give him praise,” the priest admonished the congregation.” 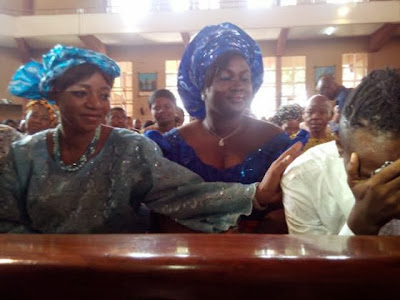 When it was time for OJB’s thanksgiving, the maverick producer, who still goes around with a nose guard and walks at a slow pace, moved forward surrounded by his three wives, children and well-wishers including the President of the Collecting Organisation Society of Nigeria (COSON), Mr. Tony Okoroji. Dressed in a white native attire with loafers of the same colour to match, OJB was full of gratitude as he nodded his head vigorously while the priest prayed. Overwhelmed by the significance of the event, OJB could not hold back his emotions as he broke down in tears when he got back to his seat.

OJB stated, “I’m really overwhelmed by all this. Do you know what it means for a person to almost lose his life three times? I’m just really grateful to God. My mum, my daughter and I have all had strange occurrences, but I just thank God.” On if he ever entertained any fear during the whole ordeal,OJB responded, “Even now I’m scared. I mean, I’ve seen a lot of people come out of this and still die.

“My perception of life has really changed; I’m still going to be doing music, but now, I care more about impacting lives.” Speaking about his foundation, he revealed, “The Foundation is set up to assist people with diseases like cancer, hypertension, kidney ailment etc. We subsidise treatment for $10,000 or less.” Also on his forthcoming book, ”The Celebrated Beggar,” Jezreel stated that, “The idea is to let people know that it’s not that easy, even as a celeb. Nothing is permanent; after a while, things change. For example, I was managing this ailment on my own for three good years without anybody knowing about it. At a point, I just had to cry out for help. I’m being real; I don’t need to deceive myself.” When this reporter posed a question to him on whether his style of music would change together with his perception, OJB answered light-heartedly, “My music is still the same. That’s a different ball game…e fe kin jeun ni (Don’t you want me to eat?).” OJB also debunked rumours circulating on the internet that he has been living a flamboyant life ever since he got back to the country. In his words, “All those stories are false; they’re just speculations. They don’t stay in my house so how do they know what I’m eating? I’m eating the same garri and okro…I’m still living the same life,” he enthused.

On the fact that he is allegedly disappointed in D’banj, he clarified, “I never said I’m disappointed in him. I only said his case was more personal because he was my boy. We launched his career in this country, and not Don Jazzy. We launched JJC in his country, you can ask D’banj when you see him.” Has D’banj now reached out to him, we wanted to know. He said, “No, and I know he wouldn’t do that. I’m not even interested in that. Why should I give attention to one person who didn’t do anything, over those that did something? What about the guys that went to the internet to support; guys like you who write about it? They are the ones I should be focusing on. Like I said, my thank you is endless. Irrespective of how much was given.” OJB’s first wife, Mabel Okungbowa, popularly known asMama J who travelled to India with the producer and donated her kidney was by his side, and we spoke to her about what was going through her mind during the transplant, “There was fear, but I put my hope in God. I hope and pray that God would perfect his healing, so he can do better things.” She also expressed gratitude to the people who supported her husband by donating money and by praying. According to her, “I know that Nigerians prayed, and I am grateful to everybody for that.” OJB’s second wife, June Okungbowa, also had a word with our reporter. She said, “I’m grateful to God for life; for a second chance. God performed a miracle and he used Nigerians, and foreigners alike to do it. We are grateful to God because it did become very dark, but his love is above everything and he showed it to us; OJB is alive today,” June, who has three kids for OJB said, while asserting that never for once did she entertain any fear as to his recovery. As OJB was driven out of the church to the hospital, many could be seen gathering in groups and thanking God that the beat-maker survived. In the words of one of the well-wishers, “It’s good to see OJB back and I’m confident that we’ll be seeing a new, improved version of him.”