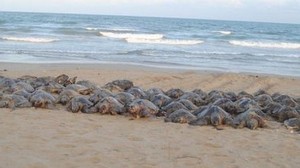 Over 900 sea turtles have been found dead along the coast in southern India, conservationists say, blaming illegal fishing near their sanctuaries.

Supraja Dharini of the Tree Foundation, a marine conservation group, said trawlers fishing illegally along the coast of Andhra Pradesh state were not taking measures to stop turtles from getting entangled in the nets.

She said more than 800 dead Olive Ridley turtles were washed ashore on Saturday, and 100 more were found on Sunday.

“Such a huge loss of the species in one night is more than three times the total number recorded in the past six years in the region,” she said, adding: “To say it is a tragedy would be a gross understatement.”

Olive Ridleys are one of the five species of sea turtle found in Indian waters.

The turtles are classified as “vulnerable,” by the International Union for Conservation of Nature, and nest on Indian shores between January and April.

The World Wide Fund for Nature estimates that there are 800,000 female Olive Ridleys worldwide.