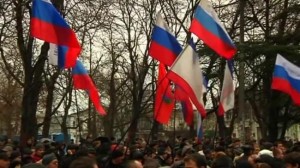 Ukraine’s fugitive president has declared he is still leader, just as dozens of heavily armed gunmen seized control of government buildings in the nation’s Crimea region and raised the Russian flag.

The moves pose an immediate challenge to Ukraine’s new authorities as they sought to set up an interim government for the country, whose population is divided in loyalties between Russia and the West. Some 150,000 Russian soldiers carried out military exercises and fighter jets patrolled the border.

“I have to ask Russia to ensure my personal safety from extremists,” Mr Yanukovych said in a statement carried by Russian news agencies on Thursday.

“I still consider myself to be the legal head of the Ukrainian state, chosen through free elections by Ukrainian citizens,” he said.

Shortly after, the same three Russian news agencies quoted an unnamed Russian official saying that Mr Yanukovych’s request for protection “was satisfied on the territory of Russia.”

Oleksandr Turchynov, who stepped in as acting president after Mr Yanukovych’s flight, condemned the takeover of government buildings in Crimea as a “crime against the government of Ukraine.” He warned that any move by Russian troops off of their base in Crimea “will be considered a military aggression.”

“Unidentified people with automatic weapons, explosives and grenades have taken over the governmental buildings and the Parliament building in the autonomous region of Crimea,” he said. “I have given orders to the military to use all methods necessary to protect the citizens, punish the criminals, and to free the buildings.”