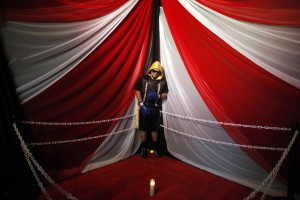 Even in death, Christopher Rivera Amaro almost looked ready to box, leaning against the corner of a simulated ring.

Mourners who came to his wake in San Juan on Friday found him posed afoot, a yellow hood on his head, sunglasses over his eyes and blue boxing gloves on his hands.

Elsie Rodriguez, vice president of the Marin Funeral Home, said Rivera’s family wanted to stress his boxing. The funeral home suggested posing him in a ring.

The makeshift ring was set up in a community center of a public housing complex. Rodriguez told The Associated Press it took them several hours to create the scene.

The funeral home has staged similar wakes for others. One featured a deceased man riding his motorcycle.

The 23-year-old Rivera had a 5-15 record in the 130-pound weight class. Police said he was shot dead Sunday in the city of Santurce. No one has been arrested.