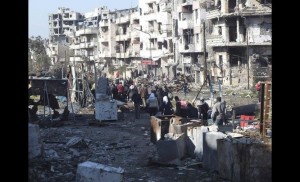 Hundreds of people have been evacuated from the besieged city of Homs, with delegates from the Syrian government and opposition beginning a fresh round of UN-brokered peace talks in Geneva.

The Syrian Arab Red Crescent (SARC) said on Monday that 300 people had left Homs, in addition to the 611 who left between Friday and Sunday.

A three-day ceasefire was in place, intended to allow the safe passage of aid and evacuees, but clashes on Saturday delayed and even threatened aid teams.

The violence was condemned by SARC and the UN’s Valerie Amos, who said on Monday it was “absolutely unacceptable” that aid workers were “deliberately targeted”.

“I am deeply disappointed that the parties were unable to hold their ceasefire in Homs,” she said.

“This led to 11 people losing their lives needlessly as the operations were carried out.

“As a political solution is sought to end this crisis, I hope that those negotiating in Geneva agree to allow the sustained delivery of aid to the 250,000 people in besieged communities in Syria.”

The first face-to-face meetings between the opposition and the government mediated by the UN-Arab League envoy, Lakhdar Brahimi, adjourned more than a week ago with little progress other than a deal brokered by the UN to allow aid teams’ access to Homs.

On Monday in Geneva, Brahimi held separate closed-door meetings with the government and opposition delegations to try to set an agenda for the coming week. However, prospects for common ground appear unlikely because the two sides continue to disagree on the core issue of President Bashar al-Assad’s future.

Homs, much of which has been reduced to rubble, was dubbed “the capital of the revolution” by activists before an offensive in 2012 by regime forces recaptured much of the city.

The civilians evacuated from Homs on Sunday were aided by the UN staff and Syrian Red Crescent volunteers amid a strong Syrian army presence.

But the Syrian Observatory echoed claims by activists that at least five people were killed in shelling that targeted the Homs district of Qarabis.

Activists accused pro-government fighters in neighbourhoods bordering the besieged districts who opposed the truce, of firing the mortar rounds.