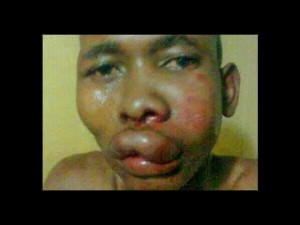 Unknown to him, Bolanle his girl who also lives around Wilmar Crescent in Olodi Apapa, Lagos, was double dating. Eric according one of his friends borrowed money to buy Valentine gift for his girlfriend.

Eric went to pick Bolanle around 10am for a breakfast in a near by Buka (Restaurant) and later they proceed to their love nest. On embarking near Godday Cinema, Bolanle’s second and richer boyfriend emerges with 3 other guys and accosted them.

They interrogated Eric and he innocently confessed that Bolanle is his love, which enraged Bolanle’s second boyfriend. He ordered his ‘guys’ to teach Eric a lesson of his life. The picture is what remains of the lover boy, Eric, when he woke up in a Hospital near Tin can, Apapa, after he was thoroughly panel-beaten.

As at the time of this post, Bolanle is still at Eric’s bed side, while the visibly shaken Eric have not said a word to her.

PRAY 4 Eric For a Speedy Recovery