A man with a 25 cm hairy tail growing from his back has been hailed as a god by villagers in India. 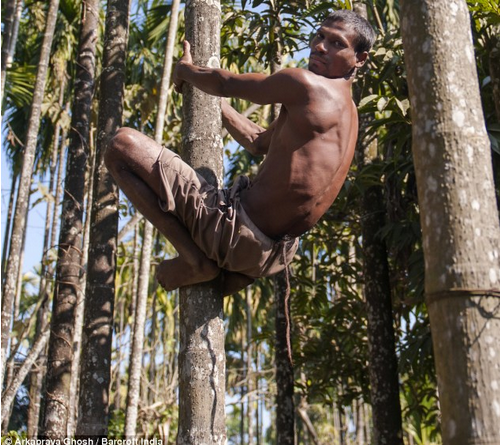 Chandre Oraon, 35, was born with a patch of hair on his lower back and has refused to have it cut, leading to locals believing that he is an incarnation of Hindu monkey deity Hanuman.

Worshippers travel hundreds of miles to queue up outside his house in Alipurduar, West Bengal, to seek blessings by touching his tail.

Tail as old as time: Chandre Oraon shows his 13cm hairy tail at his house in Jalpaiguri, India

Mr Oraon, who works as a tea picker, said: “I am Hanuman.

People have a lot of respect for me because of my tail. I don’t mind the tail at all. It is a gift by god.”

His followers see his ability to climb trees as proof that he is Hanuman, and believe he has healing powers.

Family photo: Mr Oraon stands in front of posters showing Hanuman the Monkey God at a shrine in his house in Jalpaiguri, West Bengal

Monika Lakda, who had travelled overnight to see Mr Oraon at his small makeshift shrine, said: “My brother’s son was once very unwell and had fever.

We gave him medicine but it did not work. So we came to Chandre to seek his blessings.

The baby recovered soon after that. We believe that Chandre is an incarnation of Hanuman.

They say he was born on the Holy Hanuman day. So we have faith in him.”

Doctors have offered to have the long tail removed, something which Chandre has vehemently resisted.

He said: “Once my mother chopped of my tail when I was young.

Soon after, I got a high fever and I was very sick. My mother told me that I almost died.

After that, everyone said I must keep the tail. My family said they felt me getting sick was a sign that my tail was divine.”

Mr Oraon’s tail is a result of the birth defect spina bifida, which can result in lower-back growths or, as in Mr Oraon’s case, a tuft of hair, which can grow into a tail if left uncut.

Spina bifida occurs when the spinal column does not close all of the way down – it is one of the most common permanently disabling birth defects.

A spokesperson for Shine, a spina bifida charity, told MailOnline that it is quite common for children with spina bifida to have a hairy patch on their back.

Holy man: Chandre Oraon gives his blessings to one of his many followers who has travelled to his village to meet the ‘monkey god man’

Mr Oraon’s uncle, Baldev Ram, said: “With age, his tail has also been growing longer. So, we realised very early that he has the blessings of God.”

Despite having found fame as a revered Godman, Mr Oraon admits it wasn’t always easy.

He said: “When I was young, kids in the village used to make fun of me and my tail.

And he revealed that his tail was also a turn-off for the ladies – with his family saying over 20 women rejected his romantic advances before he met wife Maino, 38.

Holy hair: Mr Oraon has not had the hair growing on his lower back cut since he was a child, and believes it is a gift from the Hindu gods

He said: “A few women rejected my proposals. I had gone to see a girl once. She immediately noticed that I have a tail.

She refused to marry me there and then. She said to my face it was because of my tail.”

Mr Oraon married Maino, 38, in 2007, before the couple had a daughter, five-year-old Radhika.

He is persevering with plans to build his own temple so he can offer mass blessings.

He said: “I want to build a temple. But I am poor man, so I am looking for some help. I work but then I don’t earn much, so I need to find other ways to fund my dream.”