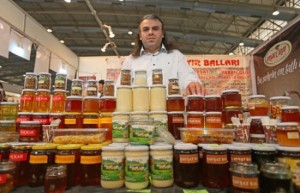 At 5,000 euros (US $6,800) per kilogram, ‘Elvish’ honey from Turkey is the most expensive in the world. The special honey is extracted from a 1,800-meter deep cave in the Saricayir valley of Artvin city, northeastern Turkey.

According to Gunay Gunduz, a local beekeeper, elvish honey is so expensive because it is naturally produced. The mineral-rich cave enhances the honey’s quality, adding to its value. Gunduz, whose family has been into beekeeping for three generations, first noticed some bees entering the cave back in 2009. That’s when he realized that it might contain honey.

“With the help of professional climbers, we entered the deep bowels of the cave and found 18 kilograms of honey plastered on its spherical walls,” he said. It was later analyzed at a French lab, confirming it to be seven-year-old, high-quality, mineral-rich honey.

The first kilogram of the honey was sold for 45,000 euros at the French stock exchange in 2009. A year later, pharmacists from China bought another kilogram at 28,000 euros. Currently priced at 5,000 euros a kilogram, it is sold in bottles of 170g and 250g. In spite of the smaller portions, Gunduz’s customers aren’t able to ignore the fact that it costs as much as a small car.

Gunduz said that the honey can be used as medicine as well as food. “The honey is produced in a natural way and without hives. The area is rich in endemic and medicinal plants. All this affects the price.” In general, Turkish honey is considered the best in the world, but Gunduz pointed out that plagiarism and artificial honey are ruining the market. “Today, the price of honey cannot be less than 15 euros,” he said.

What would you rather buy – a jar of honey or a car?