At a colourful ceremony in Njala, Sierra Leone, where he was honoured with a doctorate degree in Civil Laws, former Lagos State Governor Asiwaju Bola Tinubu gave insight into why the All Progressives Congress (APC) was formed and praised Sierra Leone for coming out of the ashes of war, reports Olukorede Yishau, just back from Sierra Leone 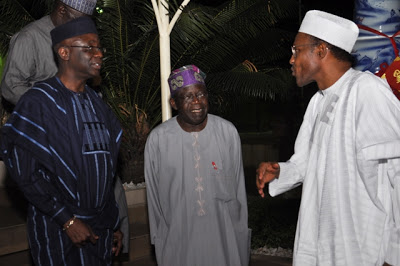 Before a massive crowd of cheering men and women, Asiwaju Bola Ahmed Tinubu was at the weekend bestowed with a honourary doctorate degree of Civil Laws at the 50-year old Njala University, Njala, Sierra Leone. Men, women and children struggled for space under the open court opposite the Administrative Block of the university, where Tinubu was honoured.

Those who could not get a seat chose to stand and watch the proceedings. Among the crowd were academics, graduands and their parents. Occupying a corner of the raised platform was a delegation from Nigeria. They were there to witness the honour being bestowed on their friend, brother and leader. The key message of the former Lagos State Governor and National Leader of the All Progressives Congress (APC): the best is yet to come. There was also another message: Nigeria lives more in darkness than in light.

Also there were council chairmen, such as Kehinde Bamigbetan (Ejigbo Local Council Development Authority (LCDA), Adeyemi Alli (Odi-Olowo-Ojuwoye ), Akeem Sulaimon (Bariga), Wasiu Eshinlokun Sanni (Lagos Island) and Bolaji Ariyoh (Oshodi-Isolo). Tinubu’s personal aides, such as Sunday Dare (Special Adviser on Media) and Dr Akintola Benson, also witnessed the ceremony. Vice-Chancellor and Principal of the Njala University Prof Abu Sesay was full of praises for Tinubu. He described him as “one of Africa’s great sons”. He added that no one qualified more than Tinubu to receive the honour. “Those who know this gentleman would agree that the university could hardly have selected a more worthy candidate for this honour,” the Vice-Chancellor said.

The Pro-Chancellor, Dr Sandy Bockarie, agreed with Sesay, describing Tinubu as a man of sterling qualities. The school’s orator, Dr Samuel Senesie, was not short of words in praising Tinubu. He was only short of time, but still took no less than 15 minutes extolling his virtues. Senesie said some of the criteria used by the university in choosing Tinubu include creativity, humility and generosity. He praised the two most important women in Tinubu’s life, his wife Senator Oluremi and late mother Abibatu Mogaji for what he has turned out to be. He said: “Our candidate was a menial worker in the United States.

He eked out living by washing dishes and serving as night guard and as taxi driver… He used the proceeds of his labour in America and paid his way into the Richard Daley College, Chicago and later transferred to the Chicago State University, where he was on the Dean’s list from the start to the finish of the programme.” Senesie was interrupted by a cheering crowd. But he was not done. “He won the prestigious university scholars award. He won the certificate of merit in Accounting and Finance. He was given the privilege to give tutorial lessons to other students for which all those colleagues remain thankful till today,” he added.

When he mounted the podium to give his acceptance speech, Tinubu was cheered on by the audience. He said he appreciated the honour done him. He said it was a great honour to be recognised by an institution which topped the University of Sierra Leone in the 2013 ranking of African Universities. Tinubu said: “It is appropriate that I step forward to receive this degree because that is exactly what Njala University and what Sierra Leone have done.

“As such, our roles today should be reversed. You called me forth to honor me. I accepted your invitation but came here not for the purpose you think. I came here not to receive an honor but, in my own humble way, that I may honor what you have done and what you symbolise to the West African sub-region.” He said no nation, no people ought to have suffered the way Sierra Leone did, adding that the country teetered on the brink of extinction and came as close to the gates of Hell. “Yet with some help from your friends, you averted disaster when disaster seemed inevitable and permanent.

You held fast to a thin ray of hope until it grew to fill the sky above the nation. “A new nation has risen from the old. Yes, scars and wounds from the battle are there but the spirit is a different one. It directs us toward a better future and away from the bleak past. The worst has passed. The best is yet to come. This is lesson you teach the rest of West Africa. Social tranquility and peace are precious things not to be taken for granted. Take them for granted and they just may be taken from you by virtue of your own negligence. We ignore these lessons at our peril,” Tinubu said. He added that leadership and those in government are the mind of a nation.

Women, he said, constitute the heart of the nation and men the backbone. He said: “But it is the youth who are the muscle, limbs and hands of a country. Leave the youth idle, leave the youth hopeless, leave them destitute, then you leave a nation at the mercy of a merciless fate. For its muscles, limbs and hands will atrophy or begin to work against it. “No nation can attain stability, let alone greatness, unless it provides productive work and opportunity to its young. If not, the young will be led astray and with them shall go not only the future but the present.

“This is why I am so committed to youth education and employment. As a leader, I would be guilty of gross dereliction of duty if I did not place a high priority on the learning and labour of our youth. To cast you to the winds of unguided fate is to cast a ticking bomb toward the rest of the nation. Njala University with her student population is an inspiration. Founded in 1964 and fifty years hence, it remains a fountain of knowledge.

Through its six established schools; School of Education, Community Health Services, Social Sciences, Agriculture, Environmental Sciences and School of Technology, Njala University continues to dispense knowledge and equip present and future leaders. And just like, the country Sierra Leone, it weathered the storms of war, absolved the carnage and deadly mortar of battle to hold forth the torch of education.

“What I see here encourages me. What I see beginning to evolve in this great country under the competent leadership of Ernest Bai Koroma. His commitment to change and good governance excites me. Old ways crumble. Old things pass away. Something new approaches. Oh yes, the best is yet to come.” In Nigeria, he said, a unique political movement is afoot. Joining other progressive leaders, Tinubu said, he recently helped establish the All Progressives Congress (APC), which, according to him, is more than a political party or organisation.

“It is a mission, a calling forth of the nation to realise its better self,” he said. He said the APC came into being after progressives forces realised that if Nigeria continues as it is, it would soon collide into the barrier of its internal contradictions, such as being a land of vast wealth yet vast penury; and a people of great talent and energy but also of despair. He added that it is shameful that the country exports the raw material that helps fuel, electrify and lubricate the global economy but lives more in darkness than in light. Tinubu said: “We formed the APC so Nigerians from all walks of life and social station might gather under one tent to develop the nation on the basis of equity and shared prosperity.

What we seek is a fair social compact so that we may avoid social calamity. “A core element of our mission is to make all levels of education, from primary to university level, accessible to all people, regardless of economic circumstance. To survive in the modern economy, education is a must. As such, responsible leadership must view education as a public right and no longer a luxury to be enjoyed only by those with the money to purchase it for themselves.

Government must help financially those who can’t help themselves in this essential regard. “For example, we advocate a liberal student aid and loan programme so that able but poor students are not denied their dream of a university education. Under our programme, young people will also receive technical and vocational training for jobs and opportunities that actually exist in the economy instead of just receiving classroom instruction for things that only exist in the textbook.

“Moreover, we seek a jobs programme whereby government works in tandem with the private sector to provide meaningful work experience, mentoring as well as temporary and permanent employment for various classes of youths. “We aim not to train and educate young people into joblessness and despair but to help them realise their finest aspirations by becoming able, productive members of society who can fend for themselves and earn livelihoods allowing them to establish families and homes of their own. “We have this dream, we move toward this goal. I tell you the best is yet to come. Moreover, we seek this improvement not just for Nigeria but for the entire sub-region. “As the most populous nation and largest economy in the sub-region, Nigeria has the singular responsibility to generate economic activity that not only sparks growth internally but also catalyses development in the sub-region.”

He said the economies of West African still too closely adhere to colonial patterns of trade and commerce, adding that the economies interact with the outside world more than they do with themselves. “We must end this. An economy with poor trade with its neighbour is a poor economy. Maintaining these patterns of trade means our economies stay mired in the lower rungs of the global division of labor. We export raw material on the cheap and import manufactured goods at dear costs.

“The industrialisation of the sub-region and vast number jobs such activity would unleash remain a dream deferred and prosperity delayed. It is high time we did for ourselves what other parts of the world have done to help themselves. “We are committed to promoting sub-regional industrialisation and manufacturing that will bring new jobs to our increasingly urbanised populations. We espouse reform that enhances the quality and quantity of internal trade among West African states so that we may become our brothers’ keeper, thus guaranteeing each other a better, more diverse economy,” Tinubu said.

Tinubu ended his remarks by announcing that he would build a hostel for the school. Applause delayed the last part of his plan for the school and when it came, he was seen off to his seat by another round of applause. He said for the next five years he would sponsor 50 indigent students of the university. The vice-chancellor thanked Tinubu and said the school would name the hostel after him.