An eagle-eyed passenger on a flight across the Indian Ocean may have seen the missing Malaysian airplane sinking into the sea the day it vanished – but nobody took her seriously, she said. 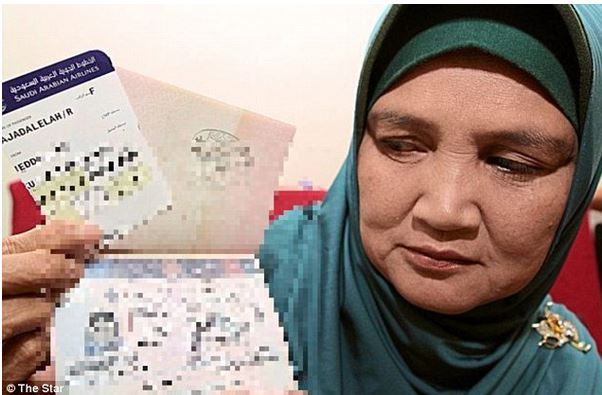 Raja Dalelah Raja Latife, 53, was flying from Saudi Arabia to Malaysia near the Andaman Islands on March 8, when she spotted what she believes was flight MH370 below.

“It looked like an airplane . . . I took a closer look and was shocked to see what looked like the tail and wing of an aircraft on the water,” she told the Malaysia’s Star Online. “I had seen several shipping liners and islands from my window earlier. Then, I saw the silvery object.”

Latife said she quickly reported the sighting to a flight attendant, who closed her window shade and told her to go sleep.

A pilot who wished to remain anonymous later claimed Latife was too high up to recognize objects below with accuracy.

“Along any flight path, especially a long-haul one such as between Jeddah and Kuala Lumpur, the altitude of the plane will be maintained at around 35,000ft once it is in the air. “This is roughly seven miles above sea level. How can anyone see anything like a boat or ship on the ground from so high up?” he questioned.

But Latife was so convinced, she filed a police report – five days before search parties fanned out in the exact same area, she said.

“I know what I saw. I am convinced that I saw the aircraft. And I will not lie. I had just returned from my pilgrimage,” she said.

On Friday, planes and ships searched the southern Indian Ocean but found no debris from the missing Boeing 777, Australia’s acting prime minister said.

The plane, carrying 239 people, lost contact with ground control before vanishing on March 8, sparking a massive hunt for the jet.

Someone shut off the plane’s transponder around 1:20 a.m. The jet later turned west towards the Indian Ocean, authorities said.