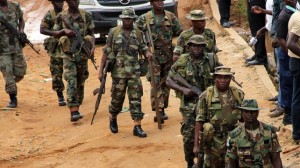 The Nigerian Army Friday refuted reports that Governor Murtala Nyako of Adamawa State was attacked by terrorists and that more terrorists have been arrested while 13 of them died following a raid on their make-shift camp sited between Borno and Adamawa states.

The army in a statement signed by Major General Chris Olukolade, Director Defence Information, said that some of those who escaped from earlier raid have also been picked up in Maiduguri and environs.

Meanwhile, calm has returned to Shuwa after the pandemonium generated by the panic in the community yesterday, when people sighted the convoy of troops going after terrorists and mistook it for another round of attack.

The statement said the alleged attack on the convoy of Governor Nyako as presented in a breaking news report were not true.

“The truth is that the Governor of Adamawa State, Murtala Nyako visited Michika and Shuwa areas of the State to sympathise with the communities that were attacked by terrorists recently. While returning, the convoy came across a noticeable pandemonium which resulted from the alarm raised by some people who had mistaken a convoy movement of troops on patrol at Kirchinga village, for another impending attack by terrorists. In the ensuing stampede and confusion, people scampered into the bush ostensibly to escape from those mistaken for terrorists.

“The incident which was presented as a “Breaking News” and scrolled on TV is therefore not a true reflection of what actually happened. The report is capable of causing unnecessary anxiety and heightening tension.

“The military authorities therefore find it necessary to put the records straight and call on residents to go about their normal activities while remaining vigilant. The operations in the North East are being consolidated and every effort is made to stop the terrorists from continuing their atrocities in that part of the country,” the statement said. [Vanguard]