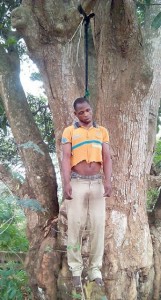 A man was said to have committed suicide at Alalubosa GRA, Ibadan in Oyo State.
The yet-to-be identified man was seen hanging from a mango tree on an undeveloped piece of land along railway line at Alalubosa.
According to reports, the body of the deceased was discovered by one of the  traders who had a shop along the railway line when he went to defecate.

Nigerian Tribune reports:
The person who noticed the body reportedly raised the alarm, attracting  other workers such as mechanics and furniture makers around the place  popularly called Mile 110.
The workers were said to have  reported at Iyaganku Division of Oyo State Police Command but were told  that the place where the body hanged was under the jurisdiction of  Nigeria Railway Corporation police. They reportedly went to Dugbe  Railway police station but as at the time of filing this report, Sunday  Tribune learnt that none of the police officers from the station had  visited the scene.
Also, when Sunday Tribune  went to the scene at about 5p.m., the body was still found hanging from  the tree while flies buzzed round his pair of trousers which was wet  with urine.