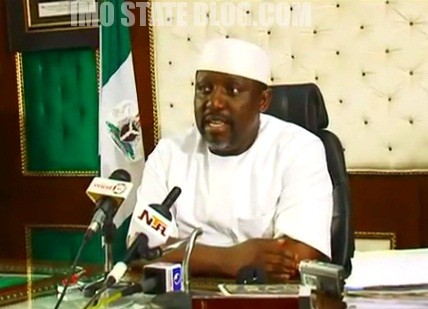 Imo State Governor, Owelle Rochas Okorocha has denied media reports that he is on the verge of dumping the All Progressive Congress (APC) for either the Peoples Progressive Alliance (PPA) or All Progressives Grand Alliance (APGA), on which platform he became governor.

The reports said Okorocha was considering dumping the APC which he helped nursed to reality, following the allegedly declining fortunes of the party in the South-East as well as the political alignment and realignment within the Peoples Democratic Party, PDP, which has seen some staunch supporters of the governor desert him for the party.

Okorocha, who spoke through his Senior Special Assistant (SSA) Media, Sam Onwuemeodo, described reports about his intention to leave APC as false saying, “The truth of the matter is that I cannot leave APC for any reason with a lot of people across the nation looking up to me in APC”.

The governor argued that nothing would make him abandon the APC, which he called a “vibrant party” having been one of the leading lights in the formation of the party and what it is today.

Okorocha said he is now standing like a colossus in Imo politics with what he has been able to achieve as governor adding that his opponents in the state have resorted to scratching him through such false reports to see if it could help their situation.

He urged people to wait for the outcome of the membership registration exercise carried out by the APC, adding that Nigerians will see that Imo people have emptied into APC.

Okorocha stressed that as far as the politics of South East and Imo State is concerned, he has become a very attractive personality adding that those threatened by such enviable records are responsible for all the gossips against him.