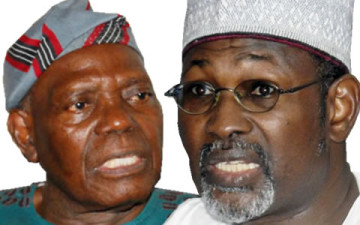 The former Osun governor made the allegation yesterday in a chat with reporters shortly after he collected his permanent voter card at a polling unit.

Akande said although he was able to collect his PVC, some residents of Ila-Orangun could not find their names on the register while some names which were previously on the register used for the 2011 elections now appeared twice.

According to him, the margin of error on the voter register, which he put at about 40 per cent is too high and unacceptable.

He alleged that the electoral umpire had been manipulating the register to favour those who he said were looting the country’s commonwealth in Abuja and were hell-bent on capturing the state by all means.

He said, “My assessment of the collection of permanent voter card is uncomfortable. I came for the validation of my voter card where I registered and voted in 2011 today. I was able to collect my card but some of the people that came after me could not find their names on the list.

“Some names which appeared once on the voter register in 2011 appeared twice now. Some names that appeared in 2011 are not appearing again on the list for the collection of the PVC which makes me to be worried and I began to ask questions. Even in some units where INEC registered 100 people, the register covered about 60 per cent names.

“This makes me to doubt INEC which smuggled 100, 000 names into the voter register in Ondo State and used it to rig the last governorship election in the state. If we don’t act now and let the world know that INEC is inefficient and fraudulent and that INEC has started the manipulation of Osun State election with this exercise, we will be doing a disservice to Nigerians.

“I am worried about the credibility of the voter register in Osun State. If the register which will be used for the election is not fraudulent, then the election can never be credible.

“But the PDP members know that they can do it and they are doing it in the open. They (PDP leaders) can go to INEC office in Abuja and collect the voter cards by fraudulent means”.

In a reaction, the Resident Electoral Commissioner in the state, Ambassador Rufus Akeju, denied the allegations, saying that some of those whose names did not appear on the register either registered twice or did not complete their registration.

Akeju warned that if further aspersions are cast on the commission’s integrity, it might be forced to publish the names of those who registered more than once.

“How can you manipulate the distribution of voter cards? What are you going to manipulate there? We insist that nobody should collect the card by proxy. We are not manipulating anything and we are going to conduct a credible election far better than the 2011 elections”, he said.