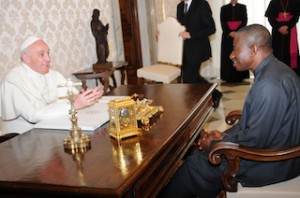 President Goodluck Jonathan yesterday met with Pope Francis at the Apostolic Palace at the Vatican.

The president and his entourage arrived Rome on Friday and were welcomed by the Pope’s representatives, and also Nigeria’s representative to the Vatican, Dr Francis Okeke.

The president also conferred with Pope Francis on the promotion of inter-faith dialogue in Nigeria and other parts of the world as a way of fostering greater global peace and security.

The President who said that his administration was already working in close collaboration with Cardinal John Onaiyekan who was “the team leader” for the effort to strengthen inter-faith dialogue in Nigeria, assured the Pope of his administration’s continued commitment to the promotion of religious harmony and the peaceful co-existence of people of all faiths.

He also assured the Pope that his administration will continue to work diligently to alleviate poverty in Nigeria through more inclusive economic growth and development.

Speaking to journalists after his meeting with the Pope, Jonathan said that Pope Francis has always taken a keen interest in Nigeria, and has now promised to visit the country.

President Jonathan said the Pope also assured him that he would continue to pray for God Almighty to bless the country and its people. 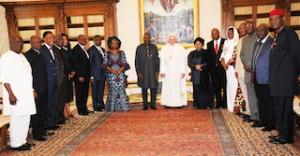 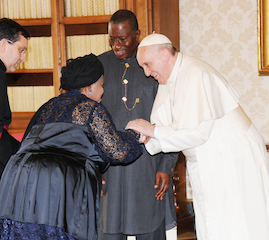 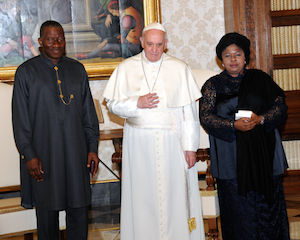 “My coming to see the Pope was to discuss issues, especially that of inter-faith dialogue which the Vatican has been promoting.

“Also the Pope has been advocating that the world should do more to eradicate poverty and make sure that the ordinary people of this world are in a position to live more decent lives. The Pope is very dedicated to poverty alleviation and I also interfaced with him on how we can collaborate more with the Vatican on what we are already doing in this regard back home,” the President said.

After his private meeting with President Jonathan, Pope Francis received the First Lady, Dame Patience Jonathan, the Minister of State for Foreign Affairs, Prof Viola Onwuliri, Governor Godswill Akpabio and his spouse, Governor Gabriel Suswam, former Governor Peter Obi and his spouse, the wife of the Senate President, Mrs. Helen Mark and other members of the President’s entourage.

Others present at the enlarged audience with the Pope included Nigeria’s Ambassador to the Vatican, Dr. Francis C. Okeke, the Chaplain of the Presidential Villa, Venerable Obioma Onwuzurumba and Chief Mike Oghiadomhe. 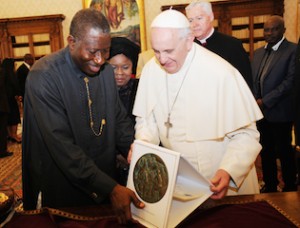 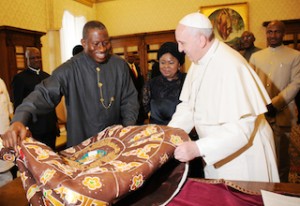 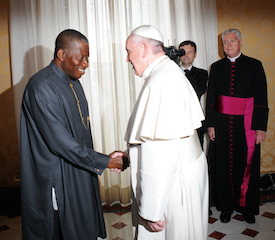