Two senior lawyers from the United States of America have asked the Attorney-General of the country, Eric Holder Jr., to without delay repatriate the $458m assets stolen by a former Head of State, Gen. Sani Abacha, and his accomplices to Nigeria. 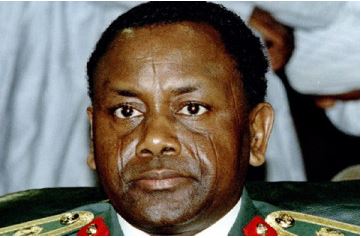 Alexander Sierck and Nicholai Diamond of Cameron LPP in Washington DC sent the letter of request dated March 18, 2014 to the attorney-general as volunteer counsels for the Socio-Economic Rights and Accountability Project.

In the letter entitled: ‘Re: Abacha Kleptocracy Forfeiture Action’, which SERAP made available to our correspondent on Wednesday, the lawyers said, “SERAP respectfully requests that the US Department of Justice establish a general process for the repatriation of assets seized as part of its Kleptocracy Initiative.

“SERAP’s request arises in the specific context of the department’s March 6, 2014 announcement that it has frozen more than $458m in corruption proceeds, which have been hidden in bank accounts around the world by former Nigerian dictator Sani Abacha and conspirators, to implement the civil forfeiture complaint filed in federal district court here in Washington.

“As the department stated in its press release announcing the seizure, these seized funds properly belong to the citizens the kleptocrats ostensibly served.”

According to the lawyers, even though the department has only recently filed the civil forfeiture complaint regarding the Abacha-related assets, SERAP respectfully submits that its request is nonetheless timely in regard to such assets.

They said, “This is because in many such cases, the kleptocrats owning the seized property do not appear in the US to contest the seizure because they would then subject themselves to personal jurisdiction in the underlying criminal case that might be filed against them. Thus, at some point, perhaps by the end of 2014, there will be a default on the Abacha asset seizure, consequently freeing up the assets for repatriation to or for the benefit of Nigeria and its citizens.”

“SERAP notes that in a September 19, 2011 interview with the Main Justice blog, Jennifer Shasky, speaking on behalf of the Kleptocracy Initiative, stated that the department has no [legal] obligation to repatriate assets subject to civil forfeiture, but that the department is committed to finding ways to repatriate or otherwise use such funds for the benefit of the victim country. SERAP assumes that this is still the department’s position.”