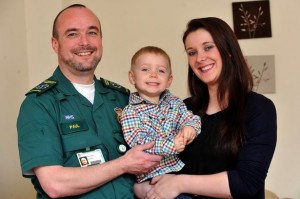 Britain’s youngest-ever 999 caller saved his mum’s life when he dialled the emergency services after she collapsed with a huge blood clot.

Riley Ward, two, is only just learning to talk – but when mum Dana Henry fell ill at the family home he incredibly managed to use the phone to summon help.

In an audio clip released by paramedics, the tiny tot can be heard telling the stunned operator: “Mummy’s asleep.”

He then keeps picking up the phone and putting it down again, in between shouting ‘hello’, and can also be heard saying: “Mummy’s on the floor”.

Operators traced the call to Riley’s home in Barrow-upon-Soar, Leics, and sent paramedics to help Dana.

She was rushed to hospital where she underwent emergency surgery after doctors discovered a blood clot and dangerous bleed on her ovary.

The 27-year-old said: “I’m so proud of Riley. He is mummy’s little hero. I have told so many people about what he did. My friends who have young children are so amazed, and are making sure their children would know what to do.”

Paramedic Paul Staples said: “When I got to Dana’s house, Riley was stood at the door with a big smile. I think he was excited he had a police officer and paramedic in his house. He was really interested in all my equipment and kept coming to check on his mummy.

“His family must be so proud of him. He is a really brave little boy.”

Riley has since been given an award by East Midlands Ambulance Service.