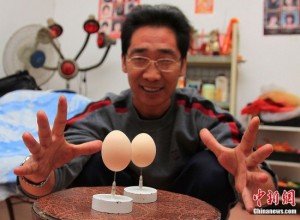 Cui Juguo, from Changsha city in China’s Hunan Province, holds the Guinness World Record for a very unique feat – he can perfectly balance eggs on small needles. As a person who frequently breaks eggs just by holding them, I think what Cui can do is phenomenal!

In the video footage below, Cui demonstrates how he can balance an ostrich egg on a needle point but as you can see in these photos, he can pull off his balancing feat with any kind of egg. “Ostrich eggs are largest in the world and I can balance them on a pin. No one else could do this,” he said. “I set a Guinness World Record on August 19, 2011, and I am still the record holder.”

Cui has been practicing the balancing act for about 6 years now, and it takes him a mere 10 seconds to put everything in place. He used to be a truck driver and he developed the unique skill to counter sleepiness on the road. “I often take several eggs with me on the road,” he said. “Once I felt sleepy, I would pull over and start to stand the egg on the needle point.”

In more complicated versions of his act, he is able to balance forks, toothpicks and eggs on a pin, all at once. That’s simply brilliant, don’t you think?