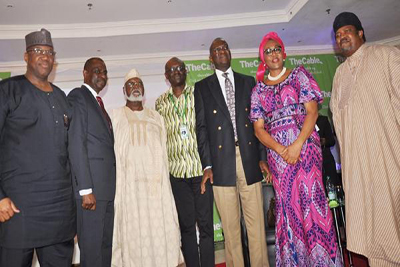 The former military ruler pleaded with politicians to always put national interest ahead of personal or party interest.

Gen Abubakar, who made this known in Lagos at the launch of The Cable online newspaper, published by a former ThisDay Editor Simon Kolawole, recognized the fact that ‘politicians will always be politicians’ but underscored the need not to engage in destructive politics.

“I appeal to politicians and all Nigerians to always put Nigeria first. I appeal to them to forget their differences when issues of security or Nigeria are at stake. Don’t play politics with security.

“Perhaps our politicians can learn some lessons from America. Whenever there is an election, they identify themselves as Republicans and Democrats.

“As soon as election is over, they identify themselves as Americans. I understand that politicians will always be politicians, but politics should not be destructive”, Gen Abubakar said.