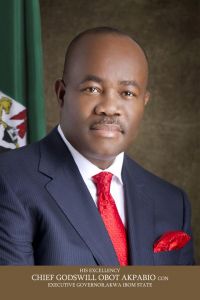 Governor Godswill Akpabio of Akwa Ibom State yesterday denied the allegation that he called for the suspension of all democratic structures in the three North-East states currently under state of emergency.

Akpabio was reacting to a joint statement issued by the spokespersons of Governors Murtala Nyako of Adamawa State and Ibrahim Gaidam of Yobe State, in which the lampooned their Akwa Ibom State counterpart and frontline Ijaw leader, Chie Edwin Clark, for purportedly calling for the declaration of a total state of emergency in view of recent happenings in the affected states.

But Akapbio, in a statement by issued by the state Commissioner for Information and Communications Aniekan Umanah, said: “At no time did Governor Akpabio offer such an advice nor granted an interview on the issue”.

He said: “Matters of emergency rule are vested in the President and no governor has any say on such decision, as it is the prerogative of Mr President and the Senate.

“Akpabio sympathises with victims of the insurgencies and prays for an end to the security challenges facing the nation”.